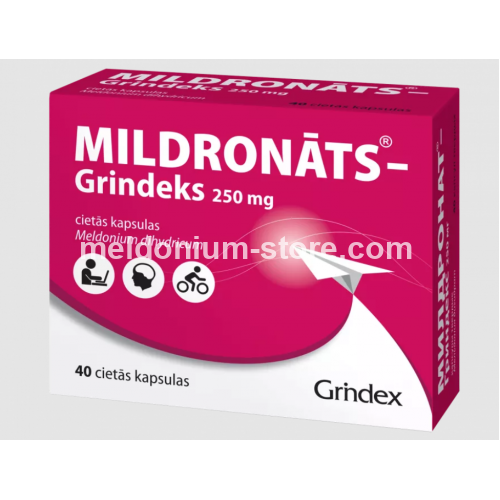 This product is Meldonium 250mg 40 capsules manufatured by Grindex which is the most popular brand name of Meldonium world wide.

What is Meldonium Mildronate ?

What are the uses of Mildronate?

·         Athletes use it to improve their stamina, enhance oxygen metabolism , speed up recovery process , increase performance.

·         Treatment of heart ischemia and its consequences

·         Meldonium in acute doses could be beneficial for the treatment of seizures and alcohol intoxication.

The science behind MELDONIUM

When organism is physically active Mildronate by Grindeks(Grindex) restores oxygen supply and restores balance of oxygen consumption in cells, it activates metabolism processes which leads to oxygen less oxygen consumption while producing energy. Usually under intense physical activity organism gets tired fast, but if Mildronate-Grindeks is consumed ,organism gets used to physical activity , it economically uses oxygen and rapidly renews energy reserves. Meldonium Mildronate increase speed of nerve impulses in organism by undertaking functions of gammabutyrobetain , thus all the corresponding reactions and impulses in organism becomes faster which leads to faster metabolism. That’s why consumption of Meldonium Mildronate leads to patients feeling more energised and athletes improve their performance.

Are There Side Effects?

Altough Mildronate is known to be a safe substance with few side effects, there are side effects which are seen in some users. According to official leaflet of Mildronate these are some of the rare side effects:
Common (may affect more than 1 in 10 patients):

Studies are yet to report any serious side effects, the long term effects are a different question. Mildronate is not ment to be used for years in a row, the usual course of usage is 1-2 months and then it is recommended to stop.